In conjunction with the Emerson Collective and Columbia University, Baldwin For The Arts is excited to announce the “I See My Light Shining” Oral History Project.

Over the next year, 10 distinguished writers and storytellers will capture oral histories and artifacts from hundreds of elders from across the country.

The Columbia Center for Oral History Research and the Interdisciplinary Center for Innovative Theory and Empirics is partnering with the Emerson Collective and Baldwin For The Arts to support acclaimed author and 2020 MacArthur Fellow Jacqueline Woodson’s new project. Through Baldwin For The Arts, the group of talented and award-winning writers will be deployed to conduct oral history interviews with people in various regions of the country, capturing unrecorded memories and life experiences before these stories are lost to history.

“From aging Civil Rights activists to Native American tribal leaders, to survivors of Stonewall, many stories remain untold or beyond the grasp of museums and institutions,” Woodson said. “When these elders pass away, their records and accounts may go with them. Our project seeks to fill these gaps before it’s too late.”

Woodson will guide the project creatively.

We are pleased to announce this remarkable group of Baldwin-Emerson fellows:

April practiced law for over 15 years, but her life took an unexpected turn when the lack of people of color in the 2015 Oscars nominations compelled her to tweet a now-famous hashtag: #OscarsSoWhite. April is a sought-after advocate, consultant, and interviewer on the representation of all marginalized communities in the arts, tech and entertainment. Reign capitalizes on her experience, using her voice to spark conversations and help structure ways to turn dialogue into action.

An award-winning journalist and professor at Northeastern University, Caleb Gayle has been a fellow at New America, PEN America, and a visiting scholar at NYU’s Arthur Carter Journalism Institute. Author of forthcoming book, We Refuse to Forget (June 7, 2022), his writing has appeared in The New York Times Magazine, The Atlantic, TNR, among others. Gayle holds degrees from the University of Oxford, Harvard Business School, and the Harvard Kennedy School of Government.

A writer of Uruguayan origins, Carolina De Robertis is the author of five novels, including The President and the Frog, a finalist for the PEN/Faulkner Award and the PEN/Jean Stein Book Award; and Cantoras, winner of a Stonewall Book Award, finalist for a Lambda Literary Award, and a New York Times Editors’ Choice. Their books have been translated into eighteen languages. They are also an award-winning translator of Latin American literature, and editor of the anthology Radical Hope: Letters of Love and Dissent in Dangerous Times. De Robertis lives in Oakland, California, and is an associate professor at San Francisco State University.

DENICE FROHMAN is a poet and performer from New York City. She’s received fellowships and support from CantoMundo, the National Association of Latino Arts & Cultures, Blue Mountain Center, and Millay Colony. Her work has appeared in The New York Times, The BreakBeat Poets: LatiNext, Nepantla: An Anthology for Queer Poets of Color, and ESPNW. A former Women of the World Poetry Slam Champion, she’s featured on national and international stages from The White House to The Apollo. She lives in Philadelphia.

Ellery Washington is a New York-based writer from Albuquerque, NM, whose first novel, Buffalo, fall 2022, returns him to his Southwestern roots. His fiction and essays have appeared in The New York Times, Ploughshares, State by State ‘A Panoramic Portrait of America,’ and Geography of Rage ‘Remembering the Los Angeles Riots’. His screenwork includes projects with Disney, Pixar, Tristar, and Paramount Pictures. He’s currently an Associate Professor of Writing at the Pratt Institute.
Photo: Nolis Anderson

Dr. Eve L. Ewing is the Chicago-based author of four books: the poetry collections Electric Arches and 1919, the nonfiction work Ghosts in the Schoolyard: Racism and School Closings on Chicago's South Side, and a novel for young readers, Maya and the Robot. She is the co-author (with Nate Marshall) of the play No Blue Memories: The Life of Gwendolyn Brooks. She has written several projects for Marvel Comics, most notably the Ironheart series.

Jenna Wortham (she/they) is a sound healer, reiki practitioner, herbalist, and community care worker oriented towards healing justice and liberation. Jenna is also an award-winning staff writer for The New York Times Magazine, and co-host of ‘Still Processing.’ Jenna is the proud editor of the visual anthology “Black Futures,”and is also currently working on a book about the body and dissociation for Penguin Press. Jenna is committed to decolonization as a way of life.
Photo: Alta Journal

Natalie Diaz is Mojave and an enrolled member of the Gila River Indian Tribe. Her first poetry collection, When My Brother Was an Aztec, was published by Copper Canyon Press, and her second book, Postcolonial Love Poem, was published by Graywolf Press in March 2020 for which she won the Pulitzer Prize for Poetry in 2021. She is a MacArthur Fellow, a Lannan Literary Fellow, a United States Artists Ford Fellow, and a Native Arts Council Foundation Artist Fellow. Diaz is Director of the Center for Imagination in the Borderlands and is the Maxine and Jonathan Marshall Chair in Modern and Contemporary Poetry at Arizona State University. She lives in Phoenix, Arizona.

Renée Watson is a #1 New York Times Bestselling author of books for young readers. She has received several awards including the Newbery Honor, Coretta Scott King Award, and an NAACP Image Award nomination. Many of Renée's books are inspired by her childhood growing up in the Pacific Northwest. Her writing explores themes of home, identity, body image, and the intersections of race, class, and gender. Renée splits her time between Portland, Oregon and New York City.

Former Poet Laureate of Los Angeles and Winner of the National Book Award, Robin Coste Lewis is Writer-in-Residence at the University of Southern California. Born in Compton, California, her family hails from New Orleans. 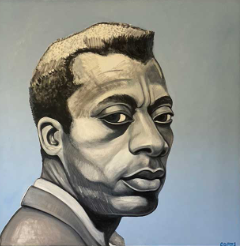 Baldwin for the Arts is a public charity recognized under Section 501(c)(3) of the Internal Revenue Code. Your contribution is deductible for federal income tax purposes as permitted by law.